I'm a US Army civilian working as an electronics mechanic at a local Army base... I can't really say anymore, because it's classified. I have a degree in electronics engineering technology, which is also one of my great loves in life.  I've only recently returned to my former rate of activity when it comes to LEGO, due to my narcissistic, emotionally-abusive wife leaving in 2016, my mom dying of cancer last year, and only getting the divorce finalized early this year (and good riddance to my ex-wife!)  Hopefully I'll be more active on the forums from here on out.

I am also bigender, which means my gender identity periodically switches between male & female. I have basically known since I was in elementary school, but didn't know what it was or come to terms with it until late 2013. If you have any questions about what bigender is, or at least what it means to me, don't hesitate to ask.

Here's a quick reference map of my LEGO setting, which I recently updated, to help people understand what I'm talking about when I give back story for my MOCs: 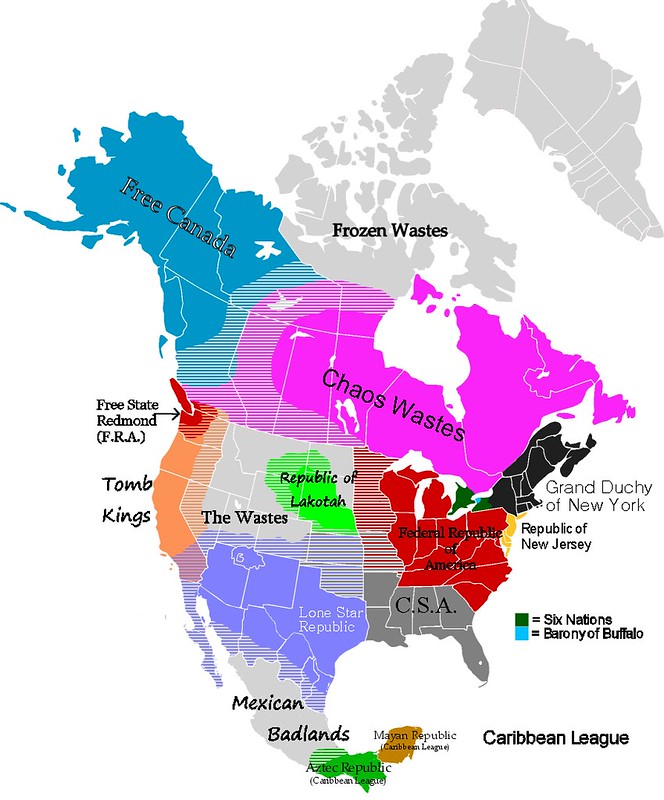 General Breakdown of the geopolitical situtation:

Good Guys: Federal Republic of America, Lone Star Republic, Republic of Lakotah, Republic of New Jersey, Free Canada, the Six Nations/Barony of Buffalo, and the Airborne Demolitions Unit (stateless army of heroes for hire that operates in the Wastes).

Bad Guys: Grand Duchy of New York, Hordes of Chaos, Tomb Kings, Wasteland Raiders, Banditos and Confederate States of America (mainly due to their Human Supremacist policies and enslavement/genocide of non-humans in their territory).

Neutral: Caribbean League, many city-states in The Wastes and the Mexican Badlands.