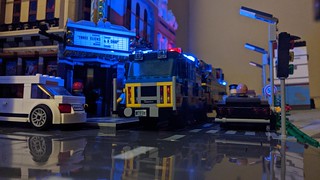 Operating in a ~40 Square Mile area, Brickford City Fire Rescue is a full time, 24/7/365 Fire Department, split into 4 unique districts (or battalions). Each battalion covers a unique area of the city, has it's own color scheme, and a unique set of call signs. Each district may also have it's own specialty vehicles, such as Hazmat, ARFF, Marine, and Wildland. BCFR Staff train constantly and are always engaging in community outreach events...the crazy color schemes are a big hit with kids!

First Letter of the Unit (E for Engine for example)

Brickford City provides exceptional medical care to its citizens by way of Brickford City EMS and BC General Hospital. BCEMS started a groundbreaking program, providing ambulance rides free of charge by allocating some of their yearly budget along with public donations and financial support from BC General. This program has seen a lot of success, as more people are willing to call for an ambulance and get care they need. BCEMS also offers specialty units, such as HazMat Decontamination/Mass Casualty Response, Special Operations, and a Paramedic interceptor.

All 4 Districts can respond anywhere within another district if needed. Many specialty units such as Hazmat 222, the IRT trucks, wildland trucks and the two rescues respond whenever needed. Rescue 340 “Northend Nightwatch” for example specializes in collapse rescue and night ops, and often get called anywhere they are needed. Outside of the district, Algonquin Fire Department provides aid for wildland fires and Lego Regional Fire Authority a spare engine.