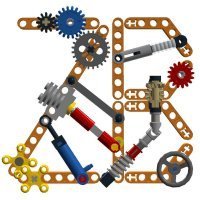 By Zerobricks, January 18, 2012 in Digital LEGO: Tools, Techniques, and Projects