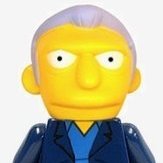 "Where's the rest of the crew?"