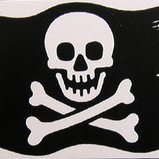 By Supersick_, March 10 in Pirate MOCs