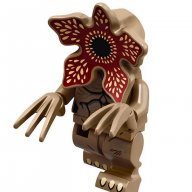 By Garmetrowolf, February 5, 2021 in LEGO Action and Adventure Themes

How Would You Rate This Set?