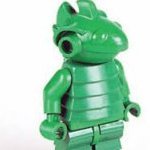 Do you think lego will ever realese another space theme