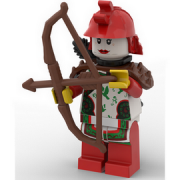 By Horlack Bricks, Saturday at 08:34 AM in General LEGO Discussion