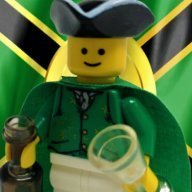 One of A Kind Ship MOC: "Barracuda of the BLACK Seas!!!"

By The Neighborhood Merchant, April 1, 2020 in Pirate MOCs