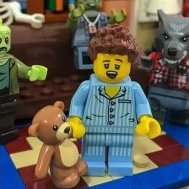 Is there a way to create instructions automatically in Stud.io?

By Chiaroscuro, January 1, 2020 in LEGO Digital Designer and other digital tools