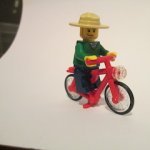 Doug72 created a topic in LEGO Technic and Model Team

This has gone though several builds & strip downs until I am almost satisfied with the module. Mk:1
Basic layout and drive system devised with wheel having eight buckets which I had used for a previous MOC, now dis-assembled.
(LEGO Black Shovel 5 x 7 x 4 1/2 with Hole/cross (18943 / 42196)
Drive from train was direct to two 16T gears engaged with the curved gear racks for a gear ratio of 8.75:1
Loading chute made with 4 lobe rotor to load 3 per bucket. This failed as I was unable to get ball loader to synchronise with bucket wheel rotation. My thoughts turned to how the Train rotary dumper was synchronised which used the magic number 21. Mk 2:-
As per Mk 1 but with the drive for ball loader rotor taken from the axis of the bucket wheel but still unable to get correct synchronisation. Mk 3: Success at last. 21 x 3 was the solution. Train arrives and directly drives the bucket wheel in via 21:1 gearing which turns two 20T gears which engage with the curved gear racks. To giviOveral reduction is 63:1
140/20 x 24/8 x 36/12 ( 7 x 3 x 3) = 63 At same time the drive to the ball loader also starts using another 63:1 gear train gearing to match rotation with the bucket wheel. Drive to the ball loader is 63:1 gearing using a 56T turntable with two 3/1 gears to get the desired 63/1 to match the bucket wheel gearing. ( 56/8 x 24/8 x 24/8) 7 x 3 x 3 =63 But only four buckets were loading. Solved - 8 wheel buckets but only 4 lobes on the ball loading rotor.
Solution, speed up ball loading rotor using 1:2 step up gears so the ball loader loads every bucket.
Overall gear ratio to drive loading rotor is 31.5:1
Next step was to build the collection chute to deliver balls into the train ball hopper. Tested and have some minor issues if too many balls are on the inlet ramp which tends to overload the number of balls trying to enter the wheel buckets. ( to be improved ) Last task is to set the train unit release timing. One rotation of the bucket wheel with 3 balls per bucket = 24 balls. If set train to release after 10 buckets = 30 balls per trip matching GBC rules. Some images of the build below - a video will be made & posted later. Biggest problem during the build was the 1/2 stud offset, both vertically & horizontally between studful & studless parts & axles. Update:-
Train reverser gearing changed to 72:1 for the trip rotor with only in one trip arm which makes bucket wheel rotate by 9 buckets, carrying 27 balls per trip cycle of approx 24 seconds.
If more than three balls try to load per bucket then some balls escape, still to resolve this problem.   Improved ball loading control gate