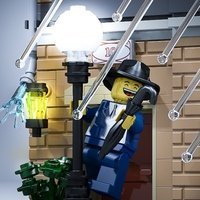 The Lion Hotel! now on Lego Ideas..Hope you like it!