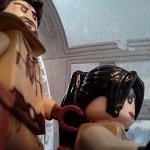 A lil Lego base and collection...