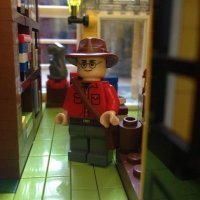 By cosmocaos, December 7, 2017 in LEGO Digital Designer and other digital tools