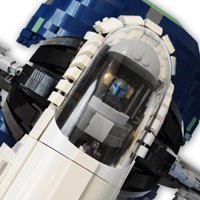 I Made a Replica of Marshall Banana's 7500pc Lego Millennium Falcon (Instructions!)