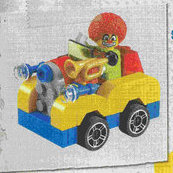 Does LEGO actually destroy their molds or not?

By Transparency for Effect, May 15, 2016 in General LEGO Discussion