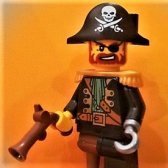 [Investigation] Who is the Captain Ironhook?