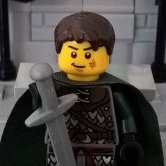 [Frozen Beyond - C] The Iceglider