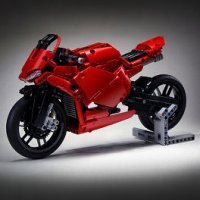 By therealjustin, January 26, 2015 in LEGO Technic and Model Team